Since Carl and I share the same name (the Sagan part, not the Carl part, that is), I’ve felt for many years that I ought to actually know something about the guy and his work. When the mother dear and father dear were reducing clutter in their home and getting rid of books*, and Carl Sagan’s Contact happened to be among them, I snatched it up. And immediately began reading it. 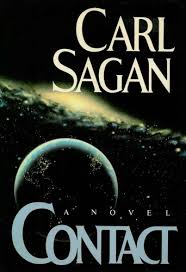 Contact was published in 1985. Sagan** was a prestigious scientist, and he wrote several novels during his time (mostly of the science fiction variety, I believe). Contact is the story of extra terrestrials sending a message to Earth, the response that humans have to receiving such a message, and how science changes as secrets beyond what is known on Earth are revealed. Throughout the story are questions about society, the psyche, religion, and the world as we know it.

One of the pieces that I liked best when reading Contact was how engaging Sagan is in his writing, and how he is able to translate immensely complex ideas and concepts into simple terms. Science and mathematics have never come easy to me, and although I’m sure I didn’t entirely “get” 95% of the theories and equations and scientific laws that Sagan discusses in Contact, it was written in such a way that I a) understood enough to enjoy the story and comprehend the general ideas, and b) wanted desperately to begin studying astrophysics.

I’m sure I won’t actually start studying astrophysics. But you never know.

Once the scientists receive the message in this novel, countries around the world begin working together to decipher the message. In the light that there is another civilization “out there,” the various nations band together and begin to think in terms of “us” as a single group, rather than being distinct from one another. It’s an interesting idea that everyone could (would?) come together and work as a team, and this idea opens the door to ask broader questions of what can we do as a global society if we work together?

Contact not only explains scientific concepts in ways that the layman can understand, but it also dives into so many other things about the world – how we think and act as individuals, how society works, our belief systems – that you can get much more from reading the novel than just a great story. It is beautifully written, and Sagan was clearly keenly insightful when it comes to the way that we work.

Have you read Contact, or other works by Carl Sagan? What did you like about it? Are you a science person? What books have you read recently? Share in the comments section below!

**It is SO WEIRD to refer to someone else with my name. How do you do it on a regular basis when you have a common name? Does it start to lead to identity crises, or does it just become the norm? I would love to see a study on something like that.