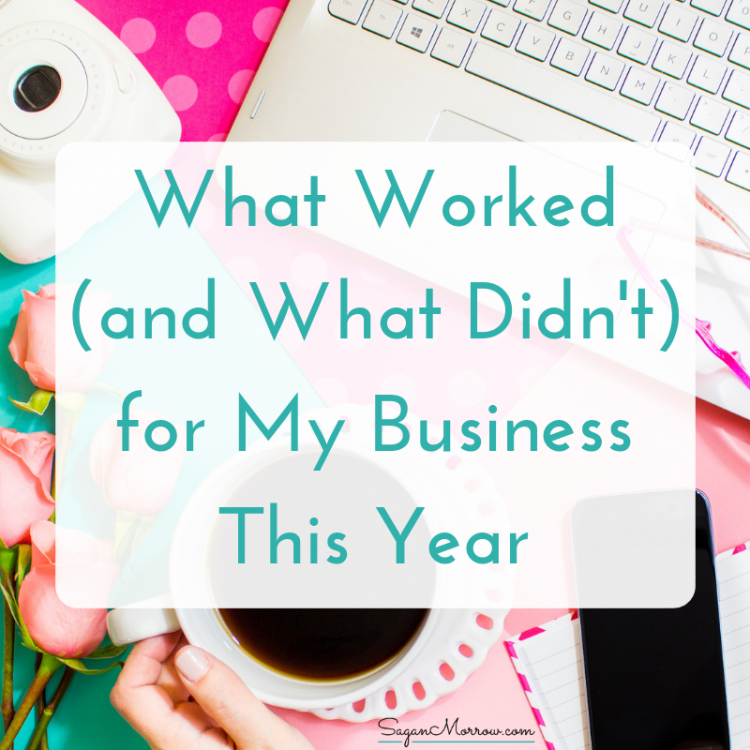 December is a time for reflection and planning ahead, don’t you think? And since this year was a doozie for my business, I’ve been think a lot about what did—and what didn’t—work for it over the past year.

There is a great deal of value in looking at the things that don’t work for us as an opportunity and learning experience and space for growth. I encourage you to focus on the positives of it so that next time, you can try something different, which will be that much more likely to be effective.

With that in mind, let’s begin with the things that didn’t work for my business over the past year…

Hear that? That’s the sound of the corporation I built with one of my besties crashing and burning.

(I can sort of joke about it now. I go through phases where I’m over it and other phases where it’s still pretty tough. These things take time to move on from, but I’m definitely getting there and making healthy progress!)

But in all seriousness, this is the one MASSIVE thing that didn’t work out for my business in the past year.

Last year at this time, I thought I’d be in a business partnership with our corporation, Juxta Communications, for the rest of my life. All of that changed over the summer and our corporation has since been dissolved. While I’m honestly extremely happy to be a solopreneur once again and go back to my own SaganMorrow.com branding, that business partnership I had (which only lasted a year and a half informally; the corporation itself didn’t make it to the one-year mark) was definitely a major fail.

Ugh. The podcast I built with my business partner went on “hiatus” a few months before our business partnership dissolved, so the podcast is also now dead. Which is… fine, except that it’s also too bad that it didn’t work out. Podcasting is so much work but it also has a lot of potential to be a wonderful tool (and collaboration opportunity etc.).

Anyway, the podcast was something we thought could be a great way to share stories, collaborate with others, cultivate relationships, build credibility and a platform to get other speaking gigs, and create a space to promote our own services and products. It didn’t work out.

"Even when things don’t work out the way we’d like, they still give us an opportunity to learn from them and do better in the future" - @Saganlives

This is a funny one, because it’s not so much that my Begin Your Biz Facebook group in general didn’t work this year, so much as it just wasn’t quite what I wanted it to be.

My intention with the group is for it to be a space where freelancers can come together to make serious progress with their business while having fun at the same time, and to remove the overwhelm by telling them what 15-minute action step they should take that day.

The other aspect of the Facebook group is that I like the idea of collaborating with others, getting brands involved as sponsors, and so on. I managed to make a very little bit of progress by testing a few things with this early in 2018, but it didn’t go anywhere (primarily, I believe, because I didn’t prioritize it).

EDITED IN 2020 TO ADD: The Begin Your Biz Challenge has since been closed to prioritize other things.

So: those are a few of the things that didn’t work out the way I hoped in the last year for my business!

This last year of business wasn’t only a challenge, however. Some things worked very well!

I wrote and published four books this year, and wrote a fifth (the latter of which I’ve submitted to a publishing company). That’s something I’m incredibly proud of.

I’m really excited to now be writing romance novels. Fiction is something I used to enjoy so much, but have done less and less of over the years. It’s exciting to finally be taking action on it and making that dream my reality. The first two books in my new contemporary romance series, Polyamorous Passions, are already available as e-books (at Amazon, Kobo, Barnes & Noble, etc.) and paperback (via Amazon); the next volume of the nine-part series will be released in February. I’m having so much fun with it!

More recently, I wrote a book about the Begin Your Biz Challenge, sharing a year’s worth of daily 15-minute action steps you can take for your business. It is a compilation of the 12 most popular monthly themes from our Facebook group (which has now been in existence for over two years!). I’m looking forward to using the book not only as a way for existing Begin Your Biz members to access previous monthly topics, but also as a tool to bring new members into the group and build a stronger community.

My spouse, Mr Science, took me to Paris for my 30th birthday this past September. And I completely fell in love with the city! While we were there, I told him about a dream I had over 10 years ago, where I wanted to spend several months living in Manhattan while writing a book. (I mean, what writer hasn’t had that dream?)

“I still want to do that… but I think now I want to do it in Paris,” I told him.

He shrugged. “Okay. That’s doable: you work from home. Let’s make it happen!”

I thought long and hard about how I could make that dream a reality, and what I know I need to do is a) set aside enough money ahead of time to take several months to live in Paris while we still pay for our mortgage in Winnipeg, and b) get a book deal in advance so that I know the book project I’m working on while living in Paris is going to come to fruition.

This means it’s something I don’t plan on doing next year, of course! But I’ve worked it into my business plan so that I want to be doing it by September 2022. That gives me a solid couple of years to write and publish books, make contacts and find an agent, etc.

I have a couple retainer clients who I adore and who give me a lot of free rein. It’s nice to know I have that consistent income coming in, especially since it gives me more opportunity and flexibility to experiment with new things in my business! Working with awesome clients on an ongoing basis is a fantastic thing when you do freelance services.

It was a tough decision to make, but in 2018 I archived my massive signature e-course (which sold for several hundred dollars) so that I could instead offer smaller, more focused and—most importantly—more affordable programs instead. I really wanted to ensure that my offerings are more accessible to a wider range of people, and to make sure that you can participate in my e-courses even if you're on a limited budget.

As a result, I launched two new e-courses this year, Pitching Clients 101 and Keep Your Clients... and in doing so, I had the most e-course sales ever in April 2018.

It was great to see so many people interested in the topic and wanting to learn more about how to pitch clients effectively. I've also received wonderful positive feedback from students on the things they've learned from those new programs!

"When it comes to business planning, be mindfully strategic and pivot accordingly" - @Saganlives

So… what’s coming up next for my business?

I’m looking forward to continuing my focus on writing books into 2019. In addition to writing more books, I also want to make a more concerted effort to bring in an income via my books. I need to do a lot more research when it comes to marketing in the book industry, and dedicate the time to ensure my books start bringing in a decent and consistent income. That's one of the biggest underlying pieces I'll be working on over the next year.

My main business goals for 2019 include:

Learn about (and grab copies of!) my books here.

I will continue to do my usual e-courses, Begin Your Biz community, blog, and weekly newsletter, of course! The nice thing is that those things are such an ingrained part of my routine that they can fit into my schedule fairly smoothly.

When we’re planning for the next year, it’s important to remain flexible and to understand that our lives and businesses could look entirely different in the next 12 months (I know mine has changed drastically over the past year!), but when we create year-long goals, it enables us to have more strategic direction so that we take action with purpose. My motto is, be mindfully strategic and pivot accordingly.

Tell me in the comments: what did (and didn’t!) work for your business this past year? What’s coming up for you in the next 12 months?